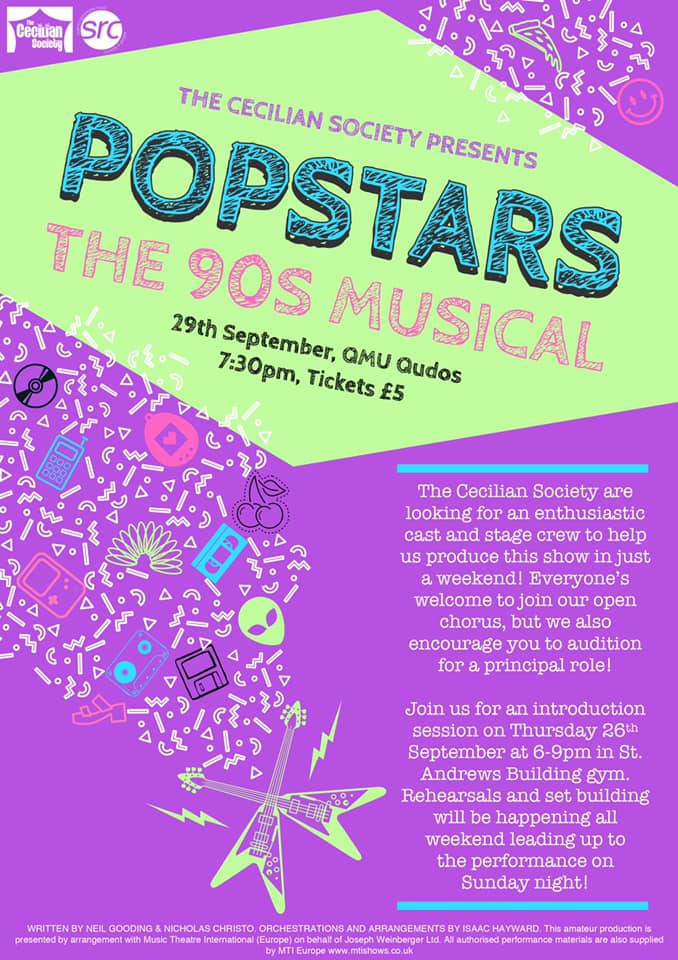 POPSTARS: THE 90S MUSICAL was our Weekend Show 2019. As per tradition, this musical was cast, built, choreographed and performed all in one weekend! (24 hours in total.) The performance took place on Sunday 29th September 2019 in the Queen Margaret Union!

Packed with pop smash hits from the hyper-coloured 1990’s by artists such as The Spice Girls, Backstreet Boys, N*SYNC and many more, Popstars tells the tale of two bands of teenagers who compete in a Talent Show.

It’s set in a school in the 1990’s where Mark is head over heels in love with his girlfriend, Queen Bee, Shannon Van de Witt. When Shannon learns that pop-band impresario Simon Austin is the surprise judge at the State Talent Show she dumps him for her chance at showbiz stardom. Mark rapidly goes from High School hero to High School zero. His garage band buddies rally around him and soon a plan for revenge is hatched to change their grunge band to a boy-band and snatch the Talent Show title from Shannon’s Candy Girls. There’s just one small problem… the boys can’t dance. Mark enlists the help of the ultra talented, new girl, Ella to help with their boy band make over and sparks soon fly.

Can Mark get the girl, get the Grand Prize and get even with the scheming Shannon closing in? It’s anyone’s guess as the countdown to the Grand Finale begins. It’s sure to be one to remember.